Civil Servants are people too

Working at dxw for the past year has introduced me to the phrase “special little snowflake”, usually preceded by “no-one is a…”. This covers most projects that I come across, but it isn’t to say that there aren’t large and important specificities to problems. More often than not, if you’re looking at the same problem again and again, you don’t need to re-invent the wheel. If your solution that worked before still tests well with the people who use it, then you should apply it again. It can be hard to battle feelings of exceptionalism though, unless you get a bird’s eye view of the landscape of public sector digital. It is tough to see points of commonality in projects.

I say all this because I had an epiphany earlier this week – Civil Servants are normal people. In a way, I always knew this. I was one for a total of 1/3 of my working life. But I was running some user sessions and one of the outputs looked as though it was going to be content design and I got thinking – organisations often see their staff as “staff” rather than “people”. So I thought I’d set out to prove that Civil Servants are just normal people with the same needs around information as anyone else.

I worked using a helpfully prepared report from the House of Commons library (despite my griping, they’re some of the best information synthesisers out there) that looks at the results of the Civil Service people survey and boils it down to the bits that are actually useful. 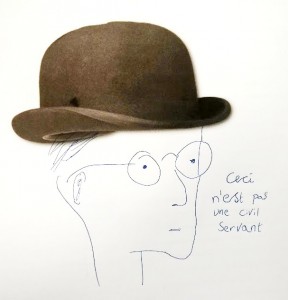 I only blog so that I can draw

I could go on. I’m not making a political comment on how the Civil Service does or doesn’t mirror the country that it serves, but the point of this is to say that Civil Servants do reflect many of the demographics that you would expect to see in the general population and are definitely not special little snowflakes. Their expertise and professionalism does not mean that they absorb information differently.

So, when you’re working on internal facing content for intranets or anything else, I can’t see a good reason to use anything other than the Style Guidelines that GDS have been using (and testing [PDF]).

The reason for this is simple: the guide is just based around users as consumers of information. They aim to match how content is written to how users look for information. It is something of an old chestnut, but google succeeded where lifestyle portals like lycos and altavista fell by the wayside because they recognised that you just want an answer, not a related article.

Trying to go against the grain and treat internal facing content like Encyclopaedia Britannica in both content and navigation will earn you shedloads of justifiably perplexed and underwhelmed users.

You know what takes less time to read than a 1,500 word article? A 500 word article. Never utilise ‘utilise’ when you can use ‘use’. Write like a human, because that’s your audience. Imagine that you’re one of the more modern versions of The Doctor, explaining things to your assistant. You’re friendly but not patronising. And remember if you’re bored when writing it then you can bet your lunch that your audience will be bored when reading it.

If you’re writing web content, just remember that your users are “normal people” with all the range that that implies. Writing for normal people is better than using hepta-syllabic words, because you just lose your audience and no one likes a show off (even ones who can draw funny pictures and use words like hepta-syllabic). If you’re a digital team having trouble reigning in bad writers (and it is bad, I’m calling it), then point to the Style Guidelines.

Do some user research (preferably lab testing) with your current content. Make them look at the results and see how frustrated users get trying to wade through reams and reams of bad content. Start to make the case for breaking internal conventions and meeting the high standards of content that users are thankfully starting to expect from Government.

* I know this is because of gender/working hours but every user of a service is an individual user regardless of their working pattern
** Yeah, I know, what grade of job is in London? What responsibilities? I think again there is an argument for that mirroring the London centrism in the rest of life.