Local Govcamp Makers Day: Our thinking – Transparency and engagement are about getting and giving data that matters to people.

On 11th September I went to the Local Govcamp Makers Day in Leeds, a group of local government digital types had an opportunity to get creative about local government and democracy. To make things that visualise how new and effective solutions might help fix problems.

We were challenged to think of ways to engage citizens in their local government. Two broad ideas came out of the initial discussion:

We worked on the 2nd idea. We had a great team: a mix of developers, project managers, clerks and councillors. Each person brought different experiences and skills, which allowed us to critically engage with ideas and think about how things might work in practice.

Our ambition as a team was to make local councils more transparent and increase citizen engagement. As we were discussing transparency, we very quickly realised that any significant engagement with citizens would be dependent on the quality of data gathered and how much of that data we could give citizens.

We decided to focus on how to get good quality data on attendance, voting and motions in council meetings. Then how to share that data via an API, so that anyone could use it and build services that people need in order to engage with their council.

Currently votes are not always recorded. When they are recorded, it is done so by counting a raise of hands. We knew that part of this would be giving clerks the tools to gather data. We thought a web based form that clerks could quickly and easily use to record attendees, motions and votes would provide the most important and quantifiable actions of council meetings for the API.  Services that use this data could provide citizens with the tools to examine voting history, motions, amendments and attendance.

We came up with user needs and then prioritised and timelined those needs, to help us focus on who would need what when. This produced the journey below: 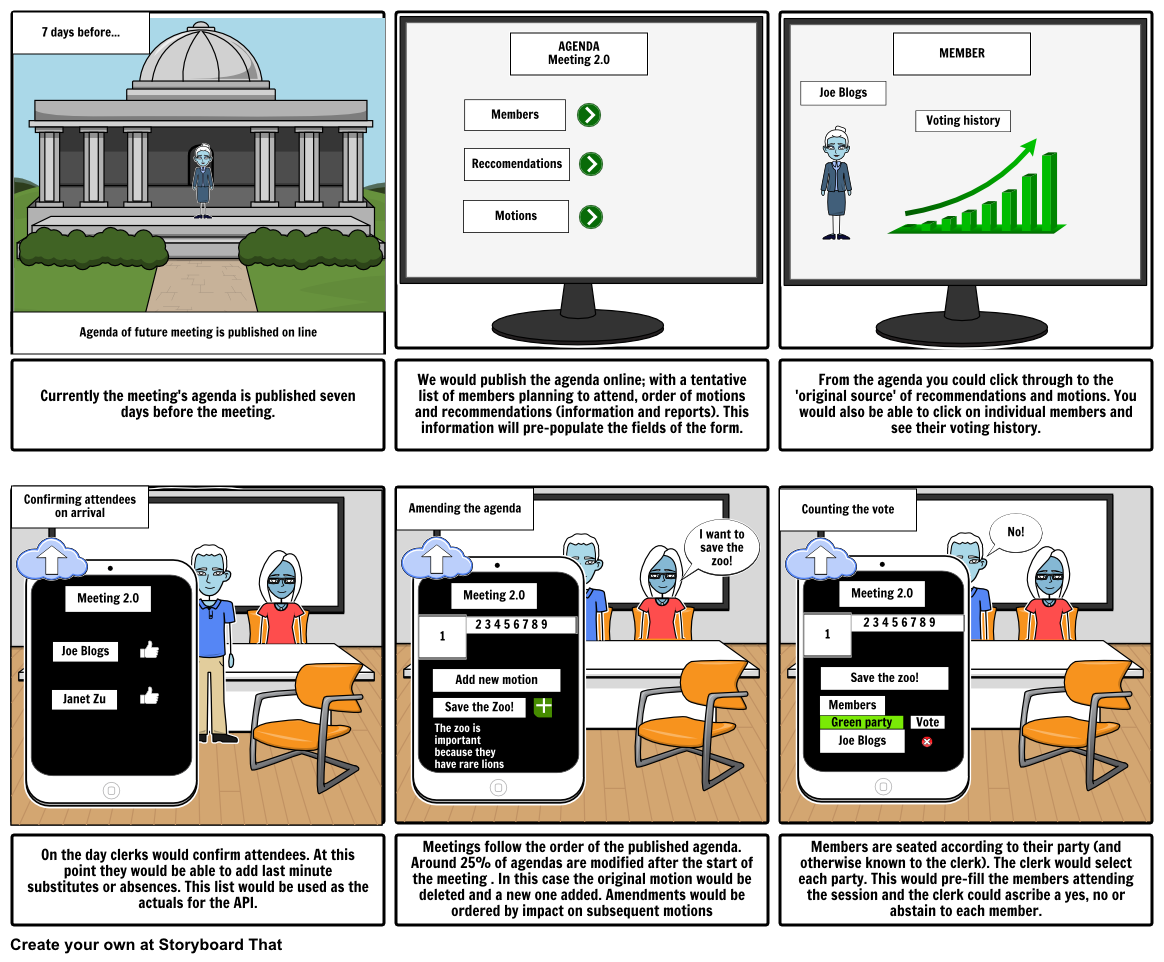 We ran out of time! (and free storyboard space)

We also had a discussions about enabling users to retrospectively tag motions with categories; for example the environment. This would enable a breakdown of the data against areas they had a particular interest in. There are lots of complexities such as consistent logic for tagging and how this tagging would be maintained, as terms for categories change over time. It would be an interesting next question to explore.

This is the beginning of our idea. The most important thing is to keep the discussion going! Let’s talk…