Does the CCS hand know what the GDS hand is doing? Is it interested?

It’s been a very busy couple of weeks thinking, talking, tweeting and writing about the Digital Services Framework and how it should ideally work. I’ve been meaning to write a roundup post to go through all the comment that’s happened so far. I will get that done soon. But in the mean time, a story has broken today that I think demands attention in its own right.

Diginomica have written about something I’ve also heard about: CCS writing to suppliers, saying that their G-Cloud 5 services for agile development will imminently be removed from the marketplace. These letters have been sent out despite GDS assuring us that agile services will remain in G5 until it expires in May. And, on seeking clarification, it appears that CCS is sticking to this line, despite GDS’s assurances to the contrary. This email is dated 17th Feb: 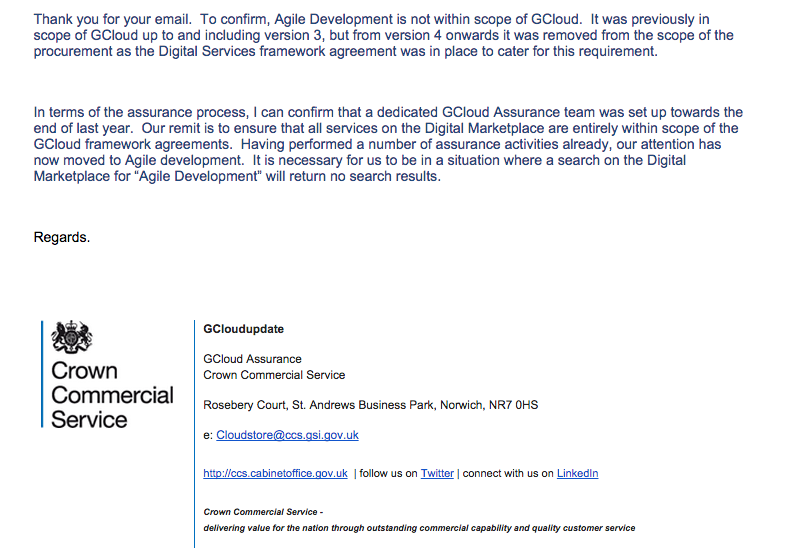 Whatever the reason for wanting to remove live G5 services was, it’s surely questionable to do so now, months after these services have been submitted, accepted and listed on the Marketplace. They are a vital part of the delivery of numerous projects. Selling agile development in this way has been a feature of G-Cloud since the start. It’s a convention established by years of usage without objection.

Removing these services at this late stage is unreasonable, especially given the damage that it would do. To do so with almost no notice at all, doubly so. Which, I imagine, is why GDS have taken a prudent decision not to allow it.

But, even with this last-minute reprieve granted, the whole thing begs numerous questions.

Why was CCS sending letters to people before GDS had made a decision about whether it was right to proceed with the removal of these services? Even if this can be put down to a problem in timing or a miscommunication, why then is CCS still sticking to its position: that agile development will be removed, per the email above? And even then, if we’re to put that down to slow communication of this decision within CCS: why is that communication so slow? Does CCS consider cutting digital SMEs off from government work an issue of such little importance that it wasn’t worth pursuing quickly? Or, worse still, did they just not realise that would be the impact of the change?

Looking back further than that: why did CCS even start sending these letters in the first place? Was this approved by GDS, and if so, why? And if not: why do CCS consider themselves empowered to make such a huge policy change, wide-ranging in its impact and very damaging to SMEs, without a nod from the Cabinet Office?

While we’re at it: why was agile development removed from the scope of G-Cloud at all, given that we don’t yet have an alternative that’s been proven to work?

It’s great that we now have a commitment from GDS not to remove these services. But as an outsider to all of this, it’s very frustrating that these bizarre, damaging decisions are being made without any external visibility. I and others have written about the growing rift between GDS and CCS and I think this is a good example of its impact.

This stuff isn’t theoretical. But for some last-minute panic at GDS, these services would be gone, and hundreds of digital SMEs doing cutting-edge work would have been cut off from government buyers at a stroke.

It’s unacceptable that these frameworks – of such vital importance to suppliers and government alike – should emerge as half-thought-out, half-baked compromises between two bits of government that can’t see eye to eye and fail to work together to make things better. It’s unacceptable that mediocre non-solutions like DSF2 are still proposed – much less implemented.

GDS have committed to undertaking a proper, thorough discovery phase for DSF3 – with CCS, the Treasury Solicitor, GDS, suppliers and buyers all working together. This is great, and exciting, and I’m looking forward to getting stuck in. But it’s only going to work if everyone approaches the problem with shared vision and common purpose: getting good services delivered, and critically, getting rid of bad assumptions and broken approaches.

But for me, buyers must rule the roost. Such a body must be advisory.

If CCS is to be that body, it needs to change its stripes. I can’t see any way to reconcile these events with the idea that CCS provides a supporting, advisory service, as they so often say they do. I can’t believe that a reverse auction in the Digital Services Framework can possibly have been what anyone wanted, apart from CCS. It’s the kind of thing one might expect from Accenture or the like: not from the team of world-class, pragmatic, creative digital professionals that is the GDS.

CCS doesn’t seem to be pushing for the kind of change that’s needed if we’re to see a radically improved approach to digital procurement. Quite the opposite: wherever we see its influence in digital, it seems to be pushing in the opposite direction to everyone else: from G-Cloud to DSF to the Network Services Framework.

Fixing this problem is long past due. It’s time to get on with it. I know that there are talented people at CCS and I hope that the organisation can make its culture more progressive and its vision more bold.

But if not, I’m with Chris Chant: CCS needs to get on board, or get out of the way.