Read about the first day here

Session 1: ‘What would YOU Call This Workshop?’ And Other Powerful Questions

It was really useful to look at the kinds of questions we generate. For example, I noticed that I tend to formulate closed questions. Closed questions aren’t necessarily “bad” or unhelpful, but it’s better to be aware when you need a closed question, and when it might yield better results to formulate open questions – such as generating ideas, encouraging collaboration, and getting people to open up and to think creatively.

One takeaway: The person who first starts the line of questioning has a lot of control over the focus and direction of the discussion. I was expecting to be asked questions about the internal architecture of the Rails framework, but my questioner was interested in why they should choose this framework above others, what are its advantages and disadvantages. This drove the funnel of questions in a different direction.

Session 2: Muddling Through The Middle Bits: what comes after Junior and before Senior

The speaker was Anna Cahalan, (@northofnormal), a career changer and boot camp graduate herself.

I haven’t been a junior for many years now, yet I struggle to apply the “senior” label to myself. I really wanted to hear from at least one other person who felt like this, and I got a whole room full of people. The best part of support groups: knowing I’m not alone, listening to other people voicing thoughts from inside my own mind, and bouncing ideas and strategies.

“Juniority” is a time when expectations are low and support is high. When one reaches mid-level, support can sometimes drop off, while expectations rise, rather abruptly, whereas we need gradual change. Anna explains, “As a junior, there are lots of milestones, they’re clearly defined, and each milestone is celebrated. The celebration dries off when reaching mid-level.”

There are still hard things, but they’re less well-defined.

The qualities that made Anna an excellent junior – such as asking ALL the questions, all the time, of anyone – were not necessarily transferable as a mid-level. The expectation was that she’d bring her input and her experience into discussions, but she felt like she couldn’t ask the same questions, or the same kind of questions, because she’d be expected to know now.

Sometimes the abrupt increase of expectations is only in our head! It can feel like we can’t ask questions anymore, or we’ll reveal ourselves as impostors. Sometimes it’s because the environment doesn’t communicate expectations well. Make the environment and processes such as that someone can make errors safely – easy to roll back breaking changes, easy to recover from failure, no blame culture.

“At the top of a mountain, there’s the foot of another mountain.”

A great metaphor that Anna brought us was “driving through Ohio”. When we’re officially not junior anymore, how can we make this fuzzy area feel less like seeing the same cows, trees and tractors over and over again? 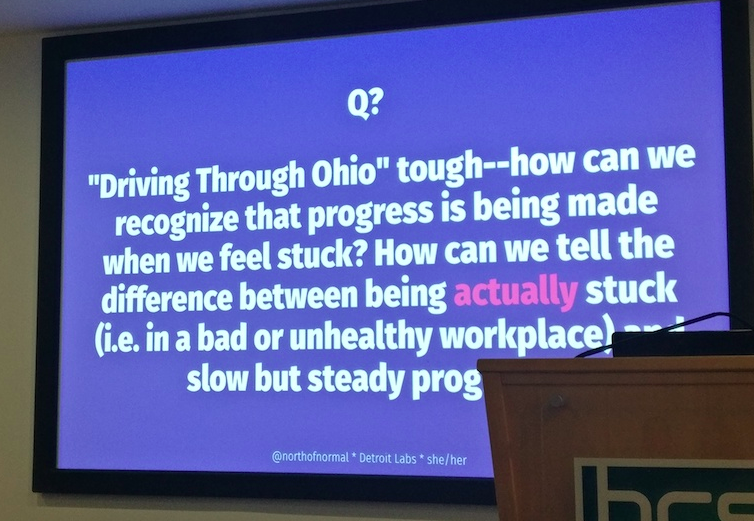 Much like a car’s mileage meter, time keeps ticking, however, seniority doesn’t just happen through the passage of time.

The questions were around how do we measure progress? How do we set goals, deliberate goals, so we can make progress and also measure it?

Self-doubt touched a nerve for many. This was the most photographed and tweeted slide from a very tweetable slide deck 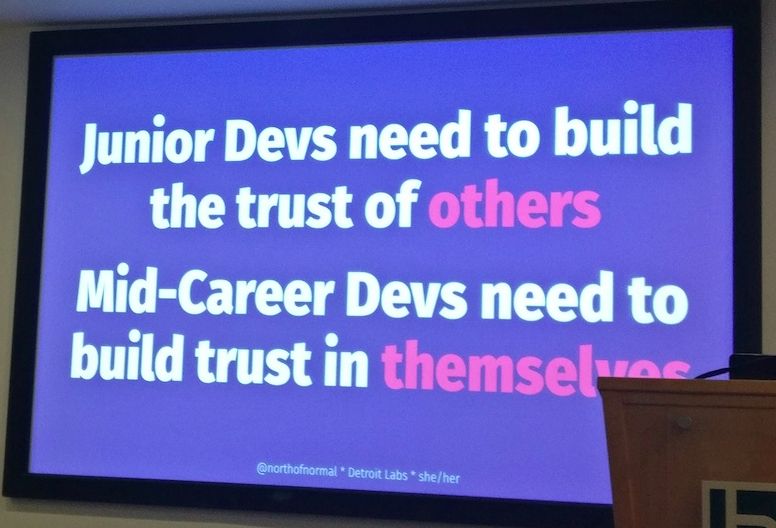 After the presentation, she set the room for a “fishbowl” discussion: a few volunteers who could leave at any point, other people could join in at any point, prompted by questions from Anna.

“How do we measure progress?”

Anna and many of the audience place a lot of value on setting goals for ourselves – measurable, achievable goals.

The ‘negotiation workshop’ (about which I’ll talk more below) contained a similar theme: that articulating the goals is helpful in itself. It’s okay if the goals “shift in transit” and are not relevant when you revisit them, but they give you a focus.

This made me pause and think about how so many people have got concrete value out of goal-setting. I’ve struggled a lot with defining these goals myself, precisely because of the nebulous area of the mid-level. What is a concrete measurable goal, beyond “deliver the deliverable”?

“Write a spec quickly”? How quickly? “Do a major architectural decision without asking for advice”? Is this a good idea? Is it a useful idea?

One hurdle I keep encountering is that I don’t have anything specific I’m looking to accomplish. I just want to do my job. Of course, I want to do it well. I want to do meaningful work. I also want to have time and mental energy for hobbies and personal relationships.

There was a discussion about how to progress in your own time, and the unfair disadvantage faced by people who have other priorities and/or disadvantages in their lives, such as parents, carers, disabled people. This makes it difficult when companies rely on people to develop professionally in their own time. People firmly believed that companies should have time for learning built into their working hours.

Anna said, “Keep a journal of your work day – things you’ve struggled with, how you solved them. Things you’ve achieved. Things that were hard.” It has to be done while they’re fresh, otherwise in time they can seem to lose their importance. When you know your job well, it’s easy to dismiss that it was once hard, and then you don’t give yourself the sense of achievement and progress.

It can be hard to keep track of the everyday achievements since the value of the journal doesn’t show itself after the short term. It can take a few months, but then you look back and remind yourself of things you’ve forgotten you’ve achieved. This is also useful when asking for a raise or promotion.

“Can anyone be a senior? Should seniority be the end goal for everyone?”

The audience pointed out that different companies define these levels in their own way, and have different needs and expectations. Some companies create their own career ladder or development framework, and some of them even make it publicly available.

“Is a senior going to be a senior when they go to a different company?” The audience leaned towards yes – many of the skills that make someone a senior are transferrable – how to look for answers, big-picture thinking, how to work with a team rather than minding only your own output.

I left the session not only full of ideas on how to improve the landscape while “driving through Ohio”, but feeling less alone, less weird and less isolated in this journey. There’s a lot of power from finding out that others have similar struggles, there’s a lot of encouragement in hearing others voice your best-hidden fears. There are options outside what seems like inflexible rail tracks. 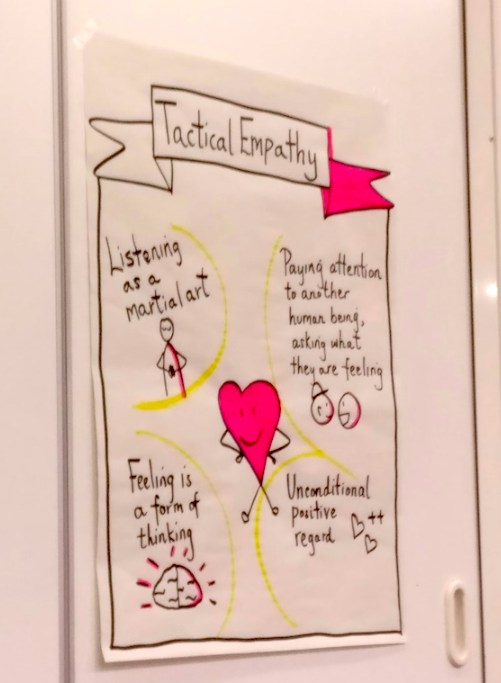 Anna has also posted her own notes from the fishbowl here

The highlight of this session for me was writing a small program that read the position of my microbit (tilted left or right, or level) and broadcast it on a channel to someone else’s microbit, getting it to display “L”, “R”, or “=”.

Tuesday evening was the game of “The Unbelievable Knuth”, one of the BBC panel shows that I enjoy. It was just as fun as the regular show to spot the hidden truths, and occasionally best the other panellists (without the pressure, of course).