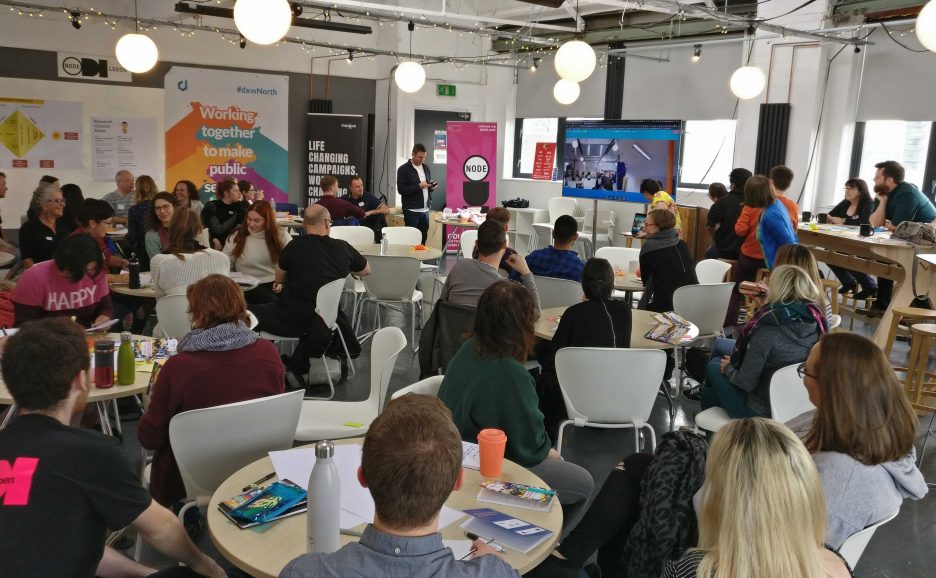 Leeds GovJam attendees on a video link to the London event

I went to Leeds GovJam a couple of weeks ago. It was my second time at the event and I had a great time there. This year I was a facilitator and I wanted to share what we did and what I learned.

First, a bit about GovJam. GovJam events are global events that take place in different cities. They get people together to work jointly on problems to make public services better. The event I went to was in Leeds, and dxw were one of the sponsors. Some of our team went along to support.

I was a participant last year and I really enjoyed it, so this time I volunteered to be a facilitator. As a designer, I have a big interest in service design and making services better. This was a great opportunity to practise sharing my skills and help others with the challenges they face when improving services.

Thinking of a problem and helping to solve it

The event was held over 2 days and the first day started with intros and a warm-up exercise. GovJam events don’t set the agenda in advance so the first task was to think about what we could get people working on together. We asked everyone to write some ideas on post-its and then grouped them by theme. 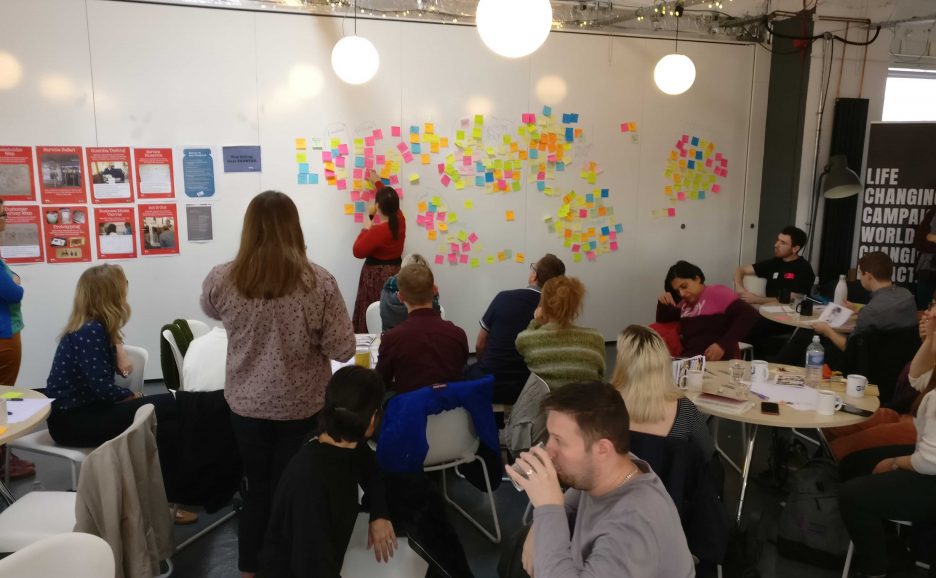 Facilitators sorting the themes from the ideas session

Once we knew the main themes, we asked everyone to choose one they wanted to work on, form a team, and then start thinking about what problem they wanted to solve. Groups started looking at things like an accessible family bus to reduce traffic and pollution in city centres, how noise pollution affects people’s wellbeing, and many more.

Then a few people, including me, talked through the service design process. I spoke about the double diamond approach, which focuses on how to solve problems from a design perspective:

Most of the first day was spent refining the problems groups were trying to solve and then doing research to understand how a service or product might solve the issue. #dxwNorth’s Saul was also there helping the teams get unstuck. 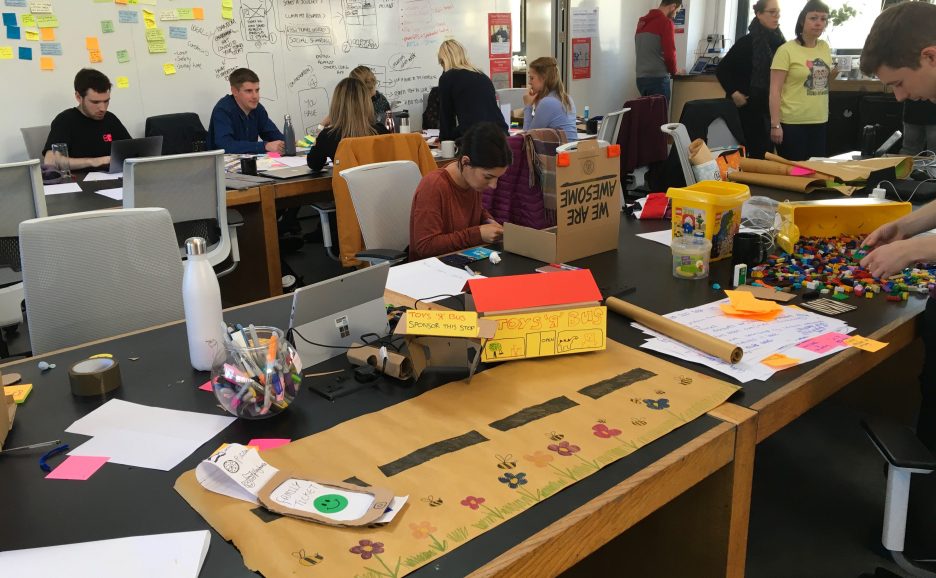 Attendees working on their prototypes

On the second day, Marianne, one of our dxw senior user researchers, facilitated a retro helping teams reflect on what had gone well so far, what hadn’t, and to think about what they’d do next. Then she asked them to chat about their lessons learned with people from other teams.

After that most people moved on to prototyping. We’d brought along some materials to help with this like lego, paper, and cardboard. But we made it clear that anything can be used to prototype whether it’s paper for storyboarding, lego to build something, or even role play.

Rich, who’s a designer in #dxwNorth, was also a facilitator and talked about the importance of testing and iterating designs. He used the example of bins and how often they don’t meet user needs. How often do people talk about the perfect bin, and not having it?

Some groups found it hard to move on to the next stage as they were having really intense discussions about how to solve all the issues they had identified. I encouraged them to think about the scope of their problem and how they could build a prototype for testing which focused on that, or a part of it. 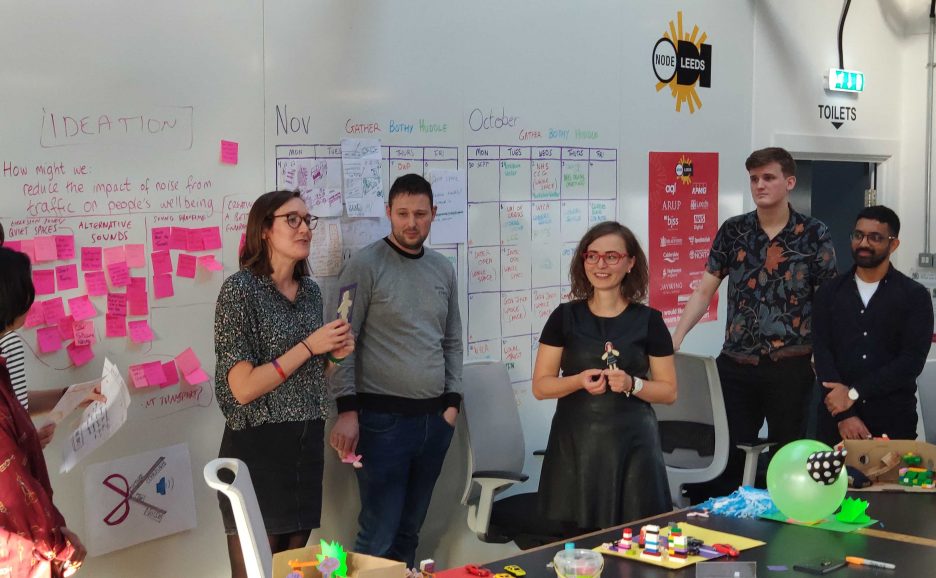 Attendees showing their prototypes during the show not tell

We made sure there was time left for a “show not tell”. Each group showed their prototype and how they were trying to solve their problem, and checked that the other teams understood how it could work. Everyone got a prize of a small plant to take away with them 🙂

Helping others to use design thinking

It was a really rewarding (if tiring) experience being a facilitator. It was useful for me to step back and think about my knowledge of designing for user needs and how to explain it to others. It also challenged me to think about how I explain the thinking behind some of the processes.

It was interesting to see how people think through problems and try to address them. The main sticking point was groups getting analysis paralysis because they got overwhelmed by looking at the detail, rather than moving to the prototype stage. I kept encouraging everyone to work through the double diamond process and not get stuck in any one phase.

I’m still working on my confidence in public speaking and knowing when to offer support. Being a facilitator at GovJam really helped. It was great to see so many people bringing fresh perspectives to problems and the breadth of creativity when prototyping different channels for a service (not just digital).

I’m looking forward to speaking at more events and helping others use design thinking to make things better for users.